To adopt, you must put things out there about why you wanted to be a parent and your hopes and dreams for your child. I remember thinking not everyone has to go through this process. 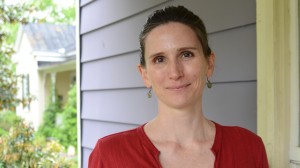 My name is Toddi and I am 46 years old and my daughter is Lina Marie Wah and her birthdate, as far as we know, is October 12, 2002

Before I had Lina, my husband and I were living in Denver. While we were there, we decided we wanted to have children. In the process of trying to get pregnant, I found out I was infertile. That led us down the path of considering adoption, and it was quite a long saga, trying to figure out where to adopt, how to adopt and what was going to work for us as a family.

At first it was the decision… do I want to try and get pregnant? I’m infertile. Once we decided that was not a good decision because I have a whole host of other health issues related to lupus, that was the first piece of the decision tree.  Once you enter the world of adoption, you have to make the decision whether to adopt domestically or internationally. Joe was not comfortable adopting domestically because he felt the child we adopted would be at risk because in terms of the biological parent returning to take the child. He did not want to have any barriers between himself wanting to commit to a child and someone else coming after that child. It didn’t matter to me, but that led us down the path to international adoption.

Being a researcher myself, that led to us exploring all the places you could adopt from… Ethiopia, Guatemala, and China ended up being the best choice for us for a whole variety of reasons. Once we decided on China, we needed to decide which agency we would work with. Again I did a lot of research which led us to CCI.

Once we decided on which agency to go with, then the paperwork parade started. There was a whole variety of documents. Our birth certificates, our marriage certificates… It’s an enormous amount of paperwork about who you are and essays about why you wanted to be a parent. What kind of parent you wanted to be and your hopes and dreams for your child. It’s a very deliberative process.  And putting things out there that perhaps we all carry implicitly, but having to make those things explicit about why you want to do this thing called parenthood… that was really tough. I remember thinking not everyone has to go through this process.

We had to go to the FBI to get fingerprinted. Then we had to get all our paperwork notarized and then sent multiple copies to Wake County, the state of North Carolina, the department of state in China. Boy, I can tell you, we guarded that paperwork with our lives. Because of all the stages. Then it was just a waiting game until we got our match.

The day I learned that we had a match… It was April fool’s day and I remember I was sitting at my desk and I knew the day was coming really soon and this email popped up and it said “we have a match for you.” And I opened it up and there was this picture of a little baby girl about four months old and it was Lina and I called Joe…and I said, it’s April fool’s day but we got our match.  I know I’ll remember that forever. And then of course I sent the picture out to everybody that we knew and everybody who had been pulling for us along the way and we finally got our match. One of the great things about adopting from China, once you got your match, you knew you would leave within six weeks.

That was a period of very high drama, in May of 2003, and you may recall that there was a SARS crisis at that point. SARS was a particularly virulent form of pneumonia that had started in Hong Kong or Shanghai and spread pretty quickly and had a pretty high fatality rate. We were the last plane out because of this whole SARS crisis, fingers crossed the entire way. They took our temperature as we got on the plane because if anyone had a temperature of above 101.5, they were going to turn the whole plane around and take all of us back. I was handing out motrin to everybody on the flight (laughing), because there was no way we were sending our flight back. When we got off the plane, we were the only 12 people in the airport.

They piled into a bus and we drove for four and a half hours. They took our temperature again at the border. We arrived at the hotel around midnight. When we got to the hotel, they said, “go to bed, go to sleep. Tomorrow morning, you will meet the babies.” Of course nobody could go to sleep.

At 9 am, we were all assembled in the hallways. And all of a sudden, there were three elevators and it was like they all opened at the same time. And these nannies, coddling these little babies in these little yellow outfits just swept out of the elevators. I remember yelling, “the babies are here, the babies are here.” I recognized Lina right away because she had a little kink in her left ear. I said, “that’s Lina! That’s Lina!” And Joe was like, “how do you know?” I said, “that’s her! That’s her!”

The head of the orphanage was there. They would announce our names. We were the last ones to go up. People would go up and before we knew it, our names were announced. And all of a sudden, she was in our arms, and I just remember thinking, “wow… we’re a family. After all that, the three years and all the drama, here we are.”

Then we were a family here. We were under house quarantine here for two weeks because of the SARS. It was another two weeks with just the three of us. Once back, we had just a feeling of job, of completion, that this was finally over, but it was tempered with “wow, this is a lot of work.”

We’re two very competent people used to controlling our universe and all of a sudden, we had this small person in our lives that didn’t allow us to control anything.  Before a child, you have so much free time. You have no conception of how much free time you have. Then your free time is with the child.

It had an enormous prioritizing influence on my work. The stuff that was readily apparent that was not essential. I became the queen of saying no, and the stuff that was essential didn’t get as much attention as it probably should have, especially that first year. I had to let go of some of my own professional standards because there was no way to keep doing it all. There was a lot of letting go.

Having children, it’s all the same emotions, you just experience them more deeply in a context that gives you a greater respect for all of humanity and what we go through. It has such a leveling quality to it. Because parenthood is universal and it’s probably one of the only experiences that you have in your life in where on one day, you are not a parent and the next you are a parent. And you are a parent for the rest of your life, until you die. I think there are not many experiences like that. No matter how poor, how rich, how famous, how not… whatever the stratification is. It’s utterly, completely universal and I think there’s something enormously beautiful about that.

How have I changed? It sounds trite but I think I’m a better person because of it, a more whole person because I’m a parent. Because of all the ups and downs you experience as a parent, it just makes you more tolerant of everything else in your life. If you can experience that with your own child, you have more compassion, more tolerance to other people outside of your family. I can feel it’s transferred into my relationships with my student, my colleagues, with friends, because you understand what other people are going through at a much more visceral level. Patience, tolerance, compassion, it just contributes to making us better people overall.

I wish we had started earlier, that we had gotten married earlier and had children earlier. Because I wish I had to have more time in my life to enjoy children. I recognize that kind of a is a futile wish… because everything happens for a reason and the sequencing in my life was the right sequencing for me. But there’s part of me that wants that. I know that Lina, by the time she grows up and perhaps starts a family, I’m going to be in my sixties or seventies. It pushes everything back and I want to have time to enjoy that with her like my mom enjoys it with me.

It is filed under Beginnings: Journeys Towards Parenthood, Read Stories and tagged with adoption, infertility. You can follow any responses to this entry through the RSS 2.0 feed.