There came a point where I just got tired of being sad all the time. I wanted to be a mom, and I didn’t care anymore how it happened. 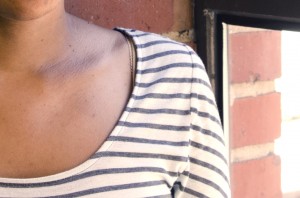 I have daughter who is 2 year and a half, who was adopted from birth.

When my husband and I talked about it, it seemed natural that we would have children together. My husband was adopted. We thought we would probably adopt at least one child, and have one child “naturally.” We started trying and nothing was happening. A lot people wait a couple of years before investigating, but being type A, I went right away. We immediately discovered that something was up. I was 30 when I was diagnosed with ovulatory resistance. I don’t ovulate regularly. At the time, it was called premature menopause.

No one ever said to me: “If you don’t have kids by your mid-twenties, your chances may actually change.” I heard on NPR the other day that OB-GYN offices are soon going to start recommending egg freezing to young women as a normal procedure as opposed to an experimental one. That possibility wasn’t open to me.

I thought this can’t be true. I come from a family where, particularly on my father’s side, women get pregnant at the drop of a hat. I have two half-sisters who were pregnant as teenagers and a battery of cousins who all had kids really, really young.

You get obsessive about finding a story of anybody with this condition who has managed somehow to get pregnant. It’s almost like chasing the golden unicorn. I tried acupuncture, yoga, cutting every ounce of sugar from my diet, massage therapy, meditation, everything I could think of to try and bring myself to this place of inner peace that will enable my body to nurture a child. None of them worked. I had to accept that this was going to be my own burden to bear.

When you go through the adoption process, one of the things you do — which is so weird — is that you sit down with an agency and you go through all the things you are looking for, and things you will accept, and things you won’t. It’s like going through a catalogue. It’s very odd and disconcerting. We had to talk about whether we were willing to accept a child whose birthmother may have used drugs at this point but not at this point, or to parent a child with this disability or that one, or have a child of mixed racial heritage. We had to talk about whether we wanted an open or closed adoption.

Once we decided on an agency, we waited for nine months, just like birthing a child, before we got the phone call that there was a birth mother who was interested in meeting us. The catch was that she was due in two weeks so we had to make a decision within 24 to 48 hours if we wanted to meet her. Then, we had just 24 to 48 hours to decide if we wanted to move forward. The baby was born one week later.

My daughter’s birth mom was beyond generous. It was very important to her that I be in the delivery room. She wanted me to be the first person to hold her because she wanted her to attach to me. It was a huge sacrifice. When my daughter came out, I cut her umbilical cord and got to hold her first. We stayed in the hospital for two days and did all of the things that new parents do. My husband got to sleep in the horrible chair that only dads have to sleep in, while I was in the bed. At first, you’re insecure and worried that she might want the baby back, but she was so generous She gave me the best gift ever. She really, really did.

I’m African-American and my husband is White. As a biracial couple, we’d always thought that if we had a child, we’d have a biracial child, but who would likely look more like me. We always thought we would have to prepare my husband for being a white parent out with a black child. Instead what’s happened is that when my daughter goes out with us, people recognize her more visually with him than they do with me. Her birthmother is white and her birthfather is mixed. It’s challenging because the last thing you want to do as an African-American female is be thought of as the nanny. That was terrifying to me and it happened a couple of times.

We have a semi-open adoption where we basically communicate with the birth family through our adoption agency. Having a third party of social workers who can help us negotiate questions is tremendously helpful for everybody. It’s really important to both of us that our daughter have the ability to have relationships with her birth family when she’s ready and if she wants them.

What surprised me? Probably the thing that surprised me the most, and everybody around me, was my patience. I didn’t realize how much patience I had. I was also surprised by how difficult certain things related to the adoption were that I hadn’t anticipated. Simple things, like when you haven’t given birth to this child, they don’t smell like you. There’s this period of time where this child is adapting to you. I also was surprised that even though I was struggling with bonding, I wasn’t impartial. She was so perfect and gorgeous. I’m continually surprised by how my daughter doesn’t know anything other than us as her parents, and nothing is strange to her about our situation.

How has my relationship with my husband changed? I feel like we’re both pretty much the same people we were before, we’re just more tired. If anything, it’s changed the way that I see him in terms of his relationship with our daughter. You can imagine that someone’s going to be a great dad, but you don’t always know what that means. There was a moment when she was only a couple of weeks old, and I was trying to calm her crying. I was bouncing her and singing to her. He, unbeknownst to me, got it on video. His love for me in this role was so clear in how he captured that moment.

What advice would I give? I wouldn’t have expected to ever have this come out of my mouth, but think realistically about having kids earlier. Or if you’re not going to have them earlier, think about how you want to have a family and what’s feasible. There is this sense among my generation that you can have it all, a career and be a mom, in your own timeframe because the technology’s always there. That’s not true. You can’t be in control of everything. Also, if you’re diagnosed with a fertility challenge, it’s important to mourn it. I didn’t do enough of that. It’s not really my style. I didn’t need to be that sad for that long. Finally, be your own advocate. Even though I researched and tried a lot of things that didn’t work in terms of getting pregnant, I’m glad I tried them. I felt like I was empowering myself by taking control.

There are so many ways to begin a family. Know yourself so you can figure out what option is best for you. If you need someone who’s going to shepherd you through all the way, think about working with a smaller agency. If something doesn’t feel right step away from it.

Embrace the process, especially if you’re going through an adoption. Embrace the process of reading, understanding, and learning. Adoption is such a deliberate decision, and so unsexy You have to request paperwork, and look at your taxes, and write a bio, and go through a home study, and get references. So much is out of your control. You just have to embrace it. Before, I would’ve just gotten upset and panicked and frozen. Now that we’re starting the process for a second time, I know I’ve just got to roll with it. It is what it is.

When you go through an infertility challenge, you suddenly understand all kinds of things that you have said or done before that, for someone who’s struggling with infertility, are just awful. I had to learn how to protect myself from baby showers, and be okay with saying, ‘I don’t necessarily want to go to that baby shower,’ or ‘I don’t think I can interact with that friend for this period of time while I’m mourning my infertility.’ I had to communicate it to my friends so that they understood. I would never dream of asking someone now why they don’t have children. I wouldn’t assume some of the same things that I assumed before.

Protect yourself and your sanity. Build a support network around you that empowers you and makes you feel safe, and like you’re doing a good job, that you’re doing the best job that you can.

It is filed under Beginnings: Journeys Towards Parenthood, Read Stories and tagged with adoption, biracial, freezing eggs, infertility, premature menopause. You can follow any responses to this entry through the RSS 2.0 feed.