I used to think that my epitaph would say, “Margaret Emily Friedrich, 1952-until fill in the date. I’m fine, thank you.” Recently, I have changed it to “She did the best she could.” Because honestly, that’s all we can do… 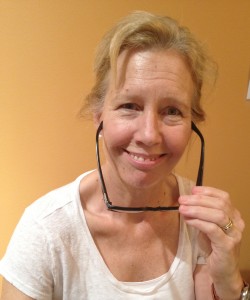 How would I describe myself before children? I would say I was a young, ferociously ambitious, working New York woman.

I have four children and have been married for 39 years. My oldest two girls are 32 and 27. Then I have two younger children who are both adopted: my daughter, P-quy, from Vietnam, is 16 and Nando, my son from Guatemala, is ten.

When I graduated from Barnard in Art History, I had absolutely no idea what I wanted to do. I couldn’t afford graduate school so I went into publishing and worked at Doubleday. I knew that I wanted a family. It was really, really important to me. I quickly saw that corporate publishing wasn’t hospitable to people with young children and that the people who had a degree of control over their lives were agents. So I left.

I’m very lucky because as I acquired more power as a young agent I was able to control the amount of time that I was spending with my children. When Julia was born, I cut my hours back, and then again five years later, when Lucy was born. I’ve kept similar hours with my younger two, also.

Why adopt two more after raising our two girls? I can’t say that we researched the decision. My husband and I have always been a fairly impulsive and fearless couple. If you think anything through too carefully, you’ll back out. There are so many things that can go wrong. It’s so much easier to not act.

After P-quy came home with us from Vietnam, my husband made a brave confession. He said, “I really wasn’t sure that I could love P-quy as much as I love Julia and Lucy, but the minute I laid eyes on her, all of those fears vanished.” And that’s how it’s been with Nando, too. If I had not turned 60 this last year, I would have adopted two more children.

Has being a mother influenced the authors I’ve taken on? Sometimes. Just two weeks ago, I sold a book by a first-time author, Rufi Thorpe, who wrote me a query as one mother to another. I dug her out of the transom. She wrote, “I am the mother to a five month old baby boy. My husband is a scientist and every day he leaves for the lab and I spend all of my time with a baby, doing housework, blowing raspberries, walking the dog. It is wonderful and strange. I tell you this so you can begin to conceive of me and of the distance between us. I feel like I am sending a letter to another world. Trying to find words in my own language that will be meaningful to you feels almost impossible.”

I received her query the night all those kindergarteners were mowed down in Sandy Hook, Connecticut. I usually pick Nando up from school on Fridays and I was standing in a row of waiting mothers. Most are at-home moms and I’m much older than all of them so we didn’t have much in common except for our children.

The kindergarteners were coming out, their barrettes at half mast, the Velcro on their sneakers un-fastened, and their artwork dusting the linoleum floor. All the parents in the line were watching these children, realizing that just ten miles up the road off I-84, those children were not coming home. I don’t think anybody was not crying on that line. I never look at email on a Friday night, but we were all so gobsmacked and horrified and that was the night when I got Rufi’s letter.

Would I describe myself any differently now than I did before children? I’m still pretty ambitious. I would say I’m a 60-year-old working mother of four.  I’m also an agent, a wife, a cook, a friend, a gardener and a caregiver because I’m the fulltime guardian to a brother who is retarded and a sister who is retarded and deaf. I’m very close to them. I’m a world class sister to them, but I’m carrying a lot and it does exact a price.

What wisdom about motherhood would I pass down to my daughters? I hope they have children one day. I know that the older two want them.

My 27-year-old works with me and is in a good and serious relationship with someone I adore. She’s learned a lot over the last five years about how I do it. Having four children may be not for her.  I don’t know. I can’t speak for her.

My older daughter is a different story.  She graduated from Columbia, worked in social work and then she went into the Peace Corps. She came back with a Spanish speaking Nicaraguan poor farmer-husband.  I said, “well honey, you can sleep with him, but did you have to marry him?”  And she said, “Mom, you have raised kick ass, self sufficient children.  And this is what you get when you do that.  And if my marrying this man is a mistake, then it will be my mistake and I will undo it.”

I thought, what can I do but not support this?  They returned to the US, bought a tiny house, got a dog from the shelter and ran an organic farm, which did well, but eventually they divorced.  It was quick, amicable and she’s now teaching 135 11th graders in a large public school in the Bronx.  She’s a gifted, caring teacher and she works seven days a week. It makes me very unhappy. It’s a completely untenable situation from my point of view.  But it is her life. It is her decision and I have a lot of faith in her ability to sort things out.

I used to think that my epitaph would say, “Margaret Emily Friedrich, 1952-until fill in the date.  I’m fine, thank you.” Recently, I have changed it to “She did the best she could.” Because honestly, that’s all we can do—to be the good enough agent and the good enough mother.  There’s never too much. You can always do something more.

It is filed under The Middle Years: Life with Children at Home and tagged with adoption. You can follow any responses to this entry through the RSS 2.0 feed.