You will lose it sometimes. And that’s ok. You won’t be the first or last mother to say, “I can’t do this…” 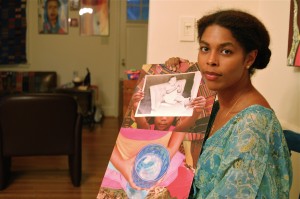 My daughter’s name is Eden (like the garden and Hebrew for “the delight of God”) Sena (“destiny given”) Kokui (which means “first born daughter”) and Segbefia (which means “humble”). Eden Sena Kokui Segbefia.

I was in graduate school in folklore when I met Eden’s father. A professor of mine had gotten a Fulbright to do research in Ghana, West Africa and I went to visit for two and a half weeks.  That’s when I met Gideon, who would become Eden’s dad. When I was heading back to the US, I dozed off in the plane and had what I would call a vision. In my family we have a tradition of cremating and putting ashes in the ocean. So, I saw these ancestral spirits coming out of the ocean, from the slave trade and my own immediate ancestors. I saw a star move from the west to the east and I knew intuitively that that was me. And I saw another star move from the east to the west and I knew intuitively that that was Gideon. I saw those two stars joined by a smaller star and I knew intuitively that that was a little girl and that her name was Eden. When I got pregnant, about two years later, we said, “if this is a girl, we don’t have a choice but to name her Eden.

We conceived her on Gideon’s first Halloween here. About three weeks afterwards, I felt my mother had come to me (my mother’s deceased) and said, “She will be a grandmother.” I interpreted that my mother was telling me that, not only would she be a grandmother, but that there was a little girl coming who would one day be a grandmother.

I was 10 years old when my mother passed. Yesterday was the first time that I actually have, in a deliberate way, commemorated her life, which was a big deal for me… because my mother did take her life. There’s been a lot of shame and silence about my mother’s death.

It has been important to me that Eden know about her grandmother. She calls her Angel Grandmother. Margaret O’Dell Caution McCullers. She understands that she is gone. But Eden’s very in tune with spirits and ancestors and I feel that my mother has come to her. She was up one morning at 5:30, rattling around in the kitchen. I asked “what are you doing?” She said, “Angel Grandmother came to me and said, ‘I’m hungry.’” So Eden put out a can of soup for my mother and told me, “by the way, mommy, she likes your blue dress and said to tell you ‘hi.’”

Having Eden, delivering Eden, pushing her into this world, taught me a lot about my power. If I can do that, I can do anything. One thing I tell all pregnant friends is “listen to all the labor and delivery stories and know that yours will be different.” Mine was. My water broke at 7:30. By 10:00, my contractions got to the point where I absolutely had to go to the hospital. In three hours, I had dilated seven centimeters. If I wanted to have an epidural, it was too late. The whole way to the hospital, I was directing Gideon, “turn right, go, go (breathing, breathing).” My mantra was, “it’s ok, it’s ok, it’s ok (breathing rhythmically). This is normal. This is natural. Your mother did this. Your grandmother did this. It’s ok. It’s ok.” I had all these intentions of doing everything, getting into the water, touching the baby’s head … but I was so tired. They said, “you gotta hold your breath and push” and I said, “I don’t want to hold my breath. It’s not intuitive.” I was very bossy and loud and vocal. I pushed three times and pushed her on out and they put her on my chest and she just lay there. I remember that we didn’t cry. We looked at her like we had known her forever. “Kokui, woe zor!” We were speaking Gideon’s language, Ewe, which is a language from Ghana. Woe zor [wā-zō] means welcome. Kokui means first daughter. “Woe zor, Kokui. Woe zor!”

Adding childcare to our relationship was really hard. I mean, I’m not married to her father any more and we’re co-parenting better now than we did then. We had so many things to struggle through. Being minorities in the South. He’s from Africa. He grew up in a black country and he’s coming to the southern part of the United States and he doesn’t know about racial profiling. I saw it as my job to teach him. Which is flipping so many gender roles on their heads right there. We had INS paperwork. I was coming out of grad school trying to find a career in folklore. While we do have a distinctive story—it doesn’t matter whether you were born here or elsewhere, are black or white, marriage is hard. Nobody can tell you how hard it’s going to be and then adding Eden to it… It was really hard. It was really, really, really hard.

Why did we split up? My mother was an accomplished woman in the 80s. Before that, she was salutatorian of her class. She was a very high achiever, who blazed a lot of trails young. She was known as a beauty. But, at a young age, I could see her unhappiness. If she was unhappy, I didn’t feel good. I knew that two unhappy parents did not equal a happy child.

How has motherhood changed my perspective on religion? Being a mother has allowed me to understand more about how God loves us. You think God is grand and magnificent, but God is also just like a mother who will wipe waste off your behind all day long without thought. Certainly there are exceptions, but the average mother is wiping butts for years. You’re in there doing that work and it is humbling. God hasn’t given me the gift of motherhood to ask something of me that God isn’t doing for me. God’s wiping my butt all day, removing my waste, preparing the way for me just as I prepare the way for Eden. Almost every Sunday, we’ll kneel in front of the image of Mary. This Mary is holding the infant Jesus and Jesus is holding the world. What I explain to Eden is because Mary has so much space, she allowed God to come into her body and grow so big that God overflowed out of her body and changed the world. We can also let God into our lives and grow so big that God comes out and changes the world through us.

What have I discovered? Eden connects me to concepts that are eternal. Also, there’s a kind of patience that motherhood calls you to have that is almost incomprehensible. Children can be so warm, and loving and perceptive and they can just distill truth and show you your life. You can look at your child and where they are and how they’re doing and you can see where you are. She’s also so ravenous. It’s an unending hunger for life and sometimes it drives me crazy. There are times when I’ll say, “you are being pushy and selfish.” And there are times when you’ll yell and scream. And you work and you work and you work and you’re always going to be working. You reach plateaus where you say, “I’m really doing this parenthood thing and this feels good.” But you know as soon as you feel like that, you’re going to go through another growth spurt. It’s about learning to have peace in the midst of that never-ending journey.

I am absolutely a different person. I am far more humble. I become more and more humble every day. I know I am dust animated by spirit. I advocate for myself and my needs and my health and my dreams not just because hey, that sounds good and that will feel good, but because it will teach Eden to advocate for herself. It teaches Eden to know how to take care of her needs and be the full woman she will be one day.

Advice? You absolutely need to tend to self and if you have a spiritual practice, dig in deeper and understand that being a mother is an act of spirituality. Being present, really listening, is an act of selflessness that is a form of prayer for me. Choosing to talk through and laugh through and cry through the hard times rather than bingeing or drinking or smoking or shopping or vegging out in front of the TV or computer. If you can cry, pray, dance, cook healthy foods, learn through those things, you’re actually pushing yourself and your progeny—not just this generation, but future generations—through to a healthier place.

You will lose it sometimes. And that’s ok. You won’t be the first or last mother to say, “I can’t do this…” Be real. Be authentic. Your girlfriends, other mothers, will help you through. Be honest with each other. “I wanted to shake my child.”  “Yeah, me too. But you did not and you will not and if you want to, you call me and we’ll talk through it.” You need people like that.

This child has been the best gift that I’ve ever been complicit in creating. If people call me Eden’s mom until the day I die, that’s fine because she is the best thing I’ve ever done or ever will do.

It is filed under Beginnings: Journeys Towards Parenthood and tagged with single motherhood. You can follow any responses to this entry through the RSS 2.0 feed.

One Response to “You will lose it sometimes. And that’s ok. You won’t be the first or last mother to say, “I can’t do this…””