I had all three of my children in the Netherlands. The difference between having a baby there versus here is night and day. We’re just crazy-making here in the U.S. 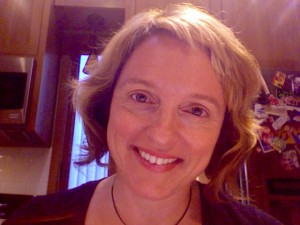 When I got divorced at 33, I was sad not only because of the end of my marriage, but suddenly also because I might not have children. I might not meet the right person in time. Which seems crazy in hindsight. I could have tried parenthood on my own. But my ideas of what I needed at that time are different from what they are now.

After the divorce, I went to India and cleared my head and heart. When I came back, I decided that I was just going to go it alone and not worry about meeting someone. I was tired. I’d had enough worrying. And two months later I met Martin quite by accident. He tells me he knew right away and I knew he was somebody special really quickly, too.

We both knew we wanted kids, but not necessarily right away. I got pregnant by accident. I remember realizing I was pregnant. I was riding my bicycle in the Netherlands and saw a mother coming towards me with a little baby on the front of her bike, and it just clicked. “I’m pregnant.” When I think about it now I kind of get shivers because it seemed so easy and sweet and free. Within a week of getting married in the States, we were living in the Netherlands and within a month, I was pregnant.

We had moved to the Netherlands for Martin’s job. It took me about five months to find a job that eventually blossomed into something quite good, but initially was just three days a week answering phones. As far as work after having a baby, I just assumed I could. I didn’t fret about it. I was happy to have work, to be in contact with people, because I was a bit lonely before that.

I had all three of my children in the Netherlands. The difference between having a baby there versus here is night and day. We’re just crazy-making here in the U.S. Here we have way too many exams and tests. There, when I thought I was pregnant, I went to the doctor and they confirmed it. At that first appointment, my doctor asked, “Do you drink coffee?” I said, “No.” He said, “Do you eat candy?” I said, “Well, how much candy?” He showed me a handful and I said, “Not everyday.” He said, “Okay. You’re fine. Come back in three months.” I saw a midwife once a month.

Most people there deliver at home. Before the birth, you get something called a comme pacquet. It’s a box delivered to your house with everything you will need for the whole delivery, including protection for the mattresses. If you’re two weeks overdue or have high risk issues, you deliver in the hospital. I had very healthy pregnancies so I only saw midwives until my boys were overdue and then I was transferred to a gynecologist. You know the midwives who deliver you because they’ve followed you all along. Whether you deliver in the hospital or at home, a nurse is assigned who comes to your house. She cooks. She cleans. She takes care of your baby and your visitors. For a whole week and even if your husband is at home. It’s unbelievable support.

I had c-sections with all three of my children. I spent four days in the hospital, then had a nurse at home for a week. I’d guess we paid around 500 dollars for all three kids. I mean you pay a lot in taxes—50-60%– but you get a lot for it. If you want an epidural, you really have to ask for it there because they don’t give medications readily. They’re stoic and tough. It’s not as cozy and as comfortable in the hospital, but the expertise is there. The Netherlands is ranked number one in the world for healthy births.

As far as returning to work, they make it very easy. When I was six months pregnant, I registered the kids for daycare. You get a stipend for each kid. Your stipend and the cost of day care is based on your income. I also found employers there understood what it was like to have a family. It’s not a big deal if you need to take a morning off to take your child to the doctor. They expect you to spend time with your family.

Returning to the U.S. was a shock. When we arrived, all the day cares that seemed reasonably priced were full. I had to put the kids into a chain day care, which was very, very expensive. My entire paycheck went to day care because at that point we had two in full-time day care and one in before and afterschool care. I just felt like I was eating, sleeping, working, and shuttling my kids off to day care. It was exhausting. It’s a grind here. I was also shocked by people’s expectations of kids at an early age here. What camp is your kid going to go to or are they studying Spanish in their pre-school? Do you have them in chess club? It just boggled my mind. I felt like I wasn’t keeping up and then the homework expectations at school seemed excessive. They don’t start learning to read in the Netherlands until they’re 7. They don’t get homework until they’re older.

How did having children affect my relationship with my husband? I mean there’s a lot of joy, obviously, but I have to say the early years especially were stressful. I felt tied to the kids much more than Martin was. I was nursing, cleaning, working, taking care of the house and grocery shopping and daycare. We didn’t have much time or energy for each other. It’s still like that to some extent, although I think we can laugh about things a little bit more now. But we still have these major, major periods of stress where we’re both just working and taking care of the kids.

What have I learned about myself? I think I’m really hard on myself. I set the bar really high. I need to back off and bring that down a little so our lives don’t feel as stressed. Also, I’ve learned how powerful my love is. I mean I would die for my kids. I don’t think I would die for anybody else. I didn’t understand that before. This makes my work hard sometimes. I work with some very sick kids. I can’t disassociate myself from parents who are watching their kids die. If I walk into a room with a really sick little kid and they’re wearing pajamas similar to what my sons wear, I have to walk out because I can’t handle it.

How has motherhood changed me? I think I’m genuinely more tolerant and understanding. I can also be quite hard and cold and I’ve noticed that I’m like that sometimes towards my own kids and I think, “Wow. I didn’t know you could be quite so callous.” For example, it’s hard for me to feel disappointed by my kids. I feel like I shouldn’t ever be because they’re my children. Shouldn’t I instead always feel nurturing and caring?

What advice would I give my daughter about motherhood? I want her to feel confident and independent. I want her to be able to make decisions that come from her heart without worrying what other people are going to think, or who she might disappoint. If she truly wants to have children or not have children, even if it’s uncomfortable, I want her to be strong enough to do that

It is filed under The Middle Years: Life with Children at Home and tagged with foreign, work. You can follow any responses to this entry through the RSS 2.0 feed.