Don’t forget to grieve the infertility. If you don’t recognize the grief, it will be there for the rest of your life. 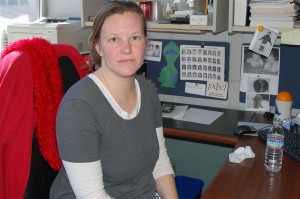 I have a 6-year-old daughter and a 7-month-old niece who I carried.

Before kids, I was living in San Francisco and had been married for seven years. I worked in higher education and I used to work as a labor coach.

I had always wanted kids. I wasn’t supposed to be able to have kids because of medical complications. That was part of the reason I stopped being a labor coach — because it was really hard to deal with women or teens who didn’t want their babies, whereas all I wanted to do was have a baby.

I cancelled my hysterectomy three days before I conceived my daughter. I thought, I’m only thirty years old. I’m not going to end up taking this step–even though it would make me feel better physically. And then I conceived her. I was 8 weeks along when I went to the nurse practitioner with pain and said, “what do I have? What’s wrong with me?” and she told me I was pregnant.

How did I decide to become a surrogate mother? My husband had some very, very close friends. I call her my sister-in-law, though she isn’t. Carol told me that she had severe endometriosis and that pregnancy wasn’t happening for them. I remember wishing we could help. They had a surrogate carry their daughter.

After they had their daughter, I sat down with them and said “I was serious. If I could help you, I would. And I can. Now I’m done having my own children.” About a year later, they came to me and said, “we want to do this.”

The medical professionals didn’t see any reason why I couldn’t conceive a second time, especially since it was going to be through IVF. We bypassed a lot of the problems that my body was having becoming pregnant in the first place.

How was the surrogate pregnancy different? All the medical parts of IVF. This procedure was basically about shutting down my system and hyper-stimulating hers to get me chemically in sync with her. My body was already pretty depleted before I even had a confirmed pregnancy. Just from all the drugs. Then they harvest the eggs and inseminate them in a Petri dish and put them back into me. They have to simulate everything, the levels of progesterone and everything else starting two months before the actual transfer of the embryo until three months after. For about five months, I gave myself daily injections.

It only took us two cycles. So we were lucky. About three months in, when the placenta takes over and starts making the progesterone, women bleed. My bleeding was a little more extreme since I was being pumped full of progesterone. That was the scary moment when I thought I was miscarrying. I said to my husband, “call James and Carol. I need to go to the ER.” Suddenly it wasn’t my husband, but it was James, I was going to go to the ER with. The idea being, don’t wake up the girls, one parent can stay at home with each girl. That became an interesting lesson for me. Having James there instead of my husband. I got to the hospital and I knew I was medically stable, but I didn’t know about the fetus. I grabbed his hand, and it wasn’t my husband’s hand, and I knew there was something odd, that visceral touch of a loved one. I knew then that I needed my husband there with James and Carol when I was giving birth.

I didn’t announce this pregnancy because I knew I wasn’t keeping this child. I went to my brother’s wedding in New York and saw all these family members who had no idea I was pregnant, because I hadn’t told them because I knew this baby wasn’t going to stay with us.

The delivery was different, too. The most interesting thing to me was, after having seen hundreds of births and having cried every single time, when Hannah came out, I didn’t cry. I was glad it was over with. I was glad she was healthy. It wasn’t until I saw my sister-in-law hold Hannah, that’s when I lost it. That’s what we had worked so hard to do.

What’s really beautiful was the first time I saw her react more strongly to James and Carol than to me. I saw how she looked at Carol the same way she looked at me, and I thought, “now you know who your mommy is.”

If we had another one, my husband felt like he would have to work all the time just to make money for the kids. He didn’t want that to be the relationship with his kids. We try to enjoy every minute of it. If that means we don’t do the things we want, go to the movies we want, go traveling, whatever the sacrifice, that’s okay. It’s the hardest work you’ll ever do, but it’s the most rewarding work, too. Hopefully, if we’re happy, we’ll show her a good example of living a happy life.

The hardest part? The death part of it. Watching my child grieve her grandfather’s death. Watching her lose him was far harder than me losing my dad. (crying) Our belief was that, death is like birth. It’s a natural cycle that happens. We’d explain, “Who’s going to go first? Well, grandpa, because he’s older and sick.” My daughter’s six. She understands even if we don’t tell her. I told my mom, “you know, you need to cry in front of her so she has permission to cry in front of us. If she sees everyone else holding back their emotions, she isn’t going to express hers.” So it was helpful to all of us to see it through a child’s eyes. Because I work in a hospital, it didn’t freak her out to see him when he went into the hospital. It taught her to have an empathy and a patience that a lot of six year olds don’t. Experiencing his death was a gift in the long run.

The best thing? Their smile. The way I look at the world. The fact that a leaf is the most inspirational thing, that my daughter shows me the world in a new way.

How have I changed? I feel freer to do whatever it is I want to do. The infertility had had a hold on me before. I feel like I pay attention to the world more. I appreciate it more and grieve it more.

Advice? Specifically to women who have struggled with infertility–not to forget to grieve the infertility even after the child is here. Having the child doesn’t take away everything. And if you don‘t recognize it, it will be harder for you. You will grieve it for the rest of your life.

It is filed under Beginnings: Journeys Towards Parenthood, Read Stories and tagged with infertility, surrogacy. You can follow any responses to this entry through the RSS 2.0 feed.