[As a behavioral neuroscientist, I know that] The problem-solving associated with having children enriches your brain. You’re doing things you would not have been doing before. You’re active. You’re engaged. This is what we’re all about. This is why we’re here. 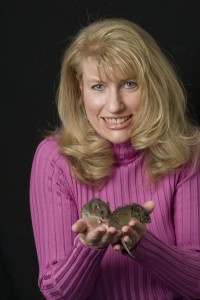 Before kids, I was hard working, focused and goal-oriented, but I still found time to enjoy my relationships with family and friends. I’ve also always been curious about life and, even after I completed my formal education, valued being a  lifelong learner.

I never considered not having children. It seemed to be a part of the life that I wanted to share with my husband and parents. It was the natural next step. I did experience some fertility problems with my first daughter and this made me crave motherhood all the more. It made me more appreciative when I finally was able to get pregnant and have a child.

[I work as a behavioral neuroscientist]. In my lab, I use rodent models to learn more about behavior. While rats aren’t people, they still engage in common fundamental behaviors that we share with them – around parenting and eating and drinking and grooming and sleeping and things like that. When I was pregnant, my research shifted towards maternal models. I had never really paid much attention to the rat with babies, but as I started to systematically study their maternal behavior, I was quickly in awe of what happens when they become mothers. Here is this rat who has not been to any baby classes — like I was currently attending  — and it gives birth to 14 pups and knows exactly what to do, and seemingly so effortlessly. I hoped I could take care of one as well as that mother rat could take care of 14.

Over the years, I’ve come to see how maternal behavior really defines mammals. After all, mammals were named after mammary glands. Reptiles drop their eggs and leave. We mammals are there for the long haul. We’re interacting. Vocalization, language, communication, curiosity and play—these all developed over time through maternal-offspring interactions. I think mothering and caring have driven evolution.

Once, when I was changing Lara- she had gas or something – and all of a sudden, she shrieked. I suddenly realized that I was crying and breathing and moving in synchrony with her. I wasn’t thinking to myself, “Oh, my gosh. What is wrong?” I was simply experiencing that moment with her. She was an extension of my emotions. This made me ponder how I had changed. I had always loved kids, but I can’t imagine that I would have gained that level of empathy and sympathy before becoming a mother.

In the lab, we examined how maternal rat brains changed in terms of foraging. I don’t know if human moms are actually better in the grocery store, but rat mothers seem to be quicker and more efficient at multitasking, getting food and returning to the nest. It’s funny, the first thing my human mom friends say [in response to my research], “I’m not smarter. I’ve got pregnancy brain.” I tell them to think about everything they are doing, taking care of two or three other human beings [in addition to the rest of their lives]. Mothers don’t give themselves enough credit. Their plate is overflowing. Of course, they’re going to forget little things here and there.

Some colleagues are examining what areas of the maternal brain are activated when they hear their baby’s cry. They’ve found that the mothers hit the ground running, whereas it takes dads about four months to really reach the same levels as the moms, unless they are stay-at-home dads. The brains are physically changing in the sense that some areas are becoming more enriched or thicker. It’s important to understand that the research described here is with moms where everything is going great. If you start taking away a mother’s resources or otherwise threaten them, the brain is vulnerable, maybe even more vulnerable because there’s so much more at stake.

Recently, in my role as a mother, I’ve transitioned from paying attention to how my girls are doing in school or socially to how I can help prepare them for a happy career or happy life. It is daunting because I’m a control freak. I have to manage my emotions differently.

We are born with a certain potential for our brain. The environments and experiences that we provide these brains with has a huge influence on what that brain and person will become. I feel this huge responsibility. We’re thinking more long term these days. I want my girls to have wonderful experiences, but more than anything, I want them to be able to take care of themselves, be self-sufficient and be able to pick themselves up when life kicks them, which it always does. I believe every mother wants to know that they have raised a child who can carry on without them. Who–if something bad happens—can recover and be successful have and full life without you.

Returning to research, we have found that even though rats don’t get Alzheimer’s disease, they do have some of the proteins that are formed in human brains with Alzheimer’s disease. It’s been interesting to see that mother rats in the later part of their lives had less of the plaque [associated with dementia]. They were able to learn more effectively later in life.

It makes us feel good that there might be some payoff in the long term to being a parent. The problem-solving associated with having children enriches your brain. You’re doing things you would not have been doing before. You’re active. You’re engaged. This is what we’re all about. This is why we’re here.

Being a parent changes your priorities. It influences the way you interact with people. I think that I’m more caring and understanding and patient than I was before. I’m also in awe of this whole process of bringing life into the world and watching it grow up and leave. My oldest daughter has just left the nest for college. It’s been so interesting to see how our relationship has changed. If she were still at home, I would probably be micromanaging her life too much—but she’s not. Now the texts that I get from her make me cry. They say things like, “Mom, I really appreciate what you and dad have done and  how fortunate I am.” It’s just priceless to have this good person who appreciates the effort that you put into raising her and then to be excited about what she’s going to do out on her own. It continues to be an adventure.

It is filed under Endings: The Children Leave Home. You can follow any responses to this entry through the RSS 2.0 feed.