There wasn’t a particular moment that I can remember thinking, “oh, my son is asking for a dress.” It was just more gradually that we realized that he was attracted to girls’ clothes and that it wasn’t a passing phase. 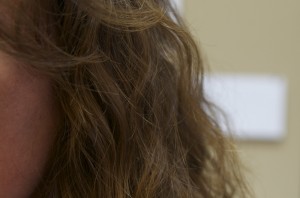 The most surprising thing about motherhood is how much children are who they are, completely apart from anything you may or may not do. I had a lot of forgiveness for my parents after I had children because I realized that they didn’t make me. We come into the world so much ourselves.

I had a strong feeling, whether you want to say it’s the universe or God, that having children was what I was supposed to do. For about a decade, I said I’m not going to have kids. And finally I broke down. [Laughs] I have a son and a daughter.

There wasn’t a particular moment that I can remember thinking, oh, my son is asking for a dress. He went to a preschool that had dress-up clothes. It was just more gradually that we realized that he was attracted to girls’ clothes and that it wasn’t a passing phase.

This has been an issue in different ways at different times and with different people. It has been hardest with people we’re close to who don’t understand and want us to curtail his expression of himself for their comfort. My partner and I don’t want to make our family uncomfortable. We don’t want to cause dissension or strife. At the same time, how can we ask our son to change who he is for other people’s comfort? Is that fair? It didn’t seem so. We had to tell some people that we were sorry, but that we were not going to ask him not to wear a dress around them.

Ironically, my son does not like to stand out. He’s very aware of people looking at him. He tends to be a little anxious. That’s just part of who he is. We’ll say to him, “we’re going into this situation. We don’t know the people and this is what we’re likely to encounter. If you choose to wear a dress, people are probably going to ask you if you’re a girl. Is that a conversation you want to have?” He usually just makes a decision.  Earlier this fall he passed as a girl and didn’t mention that that wasn’t who he was. But he doesn’t wear dresses to school. I think he feels it would be too much of a hassle, or doesn’t want to deal with his friends ribbing him, but he wears a dress to church almost every Sunday.

When he was younger, I remember looking for things that he would feel comfortable in, but also wouldn’t single him out so much. I remember trying to get him interested in kilts, for example. I was like, “look, it’s a boy’s skirt. How great is that!” He was completely uninterested. He wanted a girl’s dress. That’s what he wanted.

I’m very much a researcher. When there’s something I want to know about, I’m online. When he was four or five, I found the Children’s National Medical Center in D.C. They run a support listserv for parents and families like us. We were interviewed and accepted onto that list serv. It was very helpful, but it is really different to have that (long distance) support versus people in your own town.

I knew of another local family with a son who wore dresses, but they weren’t really interested in connecting. We live close to Durham, so on the one hand I felt very fortunate because Durham is considered the most gay-friendly city in the country. We actually switched churches to go to a church where we felt like he could be himself. If we didn’t feel supported by the school or by the space that we were in, I really think we would’ve just moved. We would’ve done what we needed to do to make sure that he could be who he is.

I’ve become really interested in how important it is not only to be around people who accept you but to be around people who are like you and in whom you can see yourself reflected. That need seems to be really strong in all of us. Between my blog and being on the listserv, we have found some other families in our area. So all of a sudden it feels like we’re almost at critical mass for a play group. But that didn’t happen right away.

I presented an academic paper about pre-school clothing and decided to put part of it online so that’s how my blog started. At first I felt like I was just writing it into a void— I didn’t know if anybody was reading it. It’s been very gratifying recently. The New York Times recently published an article by Ruth Padawer featuring several families’ stories. My family story was not one of them, although Padawer quoted something I said in my blog. About 5,000 people visited my blog that day and people from around the world have emailed me. They’ve said “you’re right. Your son’s going to be who he’s going to be, and you can’t change that. All you can do is let him know that he’s valued and valuable.” That’s been really affirming.

The most challenging thing for me is to see my child unhappy. He was talking recently about wanting magic. That’s usually kind of a code that means that he’s thinking about wanting to magically be able to be a girl. We talked a bit, and I said, “You know, if you still feel that way when you’re older, there are things that you can do.” He wanted to know all about that, and I kind of walked him through the options… you can choose to be called a girl and treated as a girl, and when you are older, they have surgeries. He practically yelled at me “Mommy, that’s not going to help!” And I said, “Why is that?” And he said, “That won’t help me to have been born a girl.” It’s true. I can’t change that.

My children will not know until they’re well into adulthood how lucky they are in the father department. My husband is very involved, very hands-on, very accepting of who they are. He said about our son, “Well, this situation wouldn’t be my preference, but I know that that’s not his problem. That’s my problem, and I’m not gonna make it his problem.” That’s just a beautiful thing.

I think motherhood has and hasn’t changed me. It is fundamentally different to have someone else besides yourself to be responsible for, to make sure that they get what they need. You also have a much larger sphere of concern, You’re tuned in in a lot of really different ways. You have these exterior sensors that are thinking about what things are like for other people in the world.

The biggest advice for any parent is to know that your child is who your child is. Our job isn’t to change them. Our job is to shepherd them into being the best whoever they are that they can be. What if every child who was different was constrained and successfully contained into society’s boxes? Think of all the people we wouldn’t have. No good comes from squashing your children.

This is what I think: You decided to have kids, so lay all your bets on them.

It is filed under The Middle Years: Life with Children at Home and tagged with boys in dresses, boys in pink, cross_dressing. You can follow any responses to this entry through the RSS 2.0 feed.