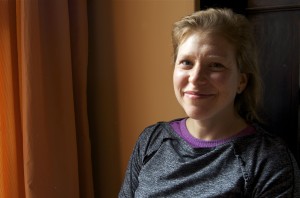 When I look back at my diaries, I feel like I was waiting to become a mother for as long as I could remember. It was a very deep, intuitive yearning.

I got pregnant very easily the first time. For many years, I had warred with my body for a variety of reasons. I have an intestinal disease. I had really struggled with how I was supposed to look. The experience of being pregnant, to me, was healing. I guess I felt that I was doing something important and that, in order to take care of this baby-to-be, I would have to be kind and compassionate to myself. That judgmental voice that was so amplified in the past softened. I found I could direct a compassion that I had always directed outward more inwards.

[After my first two children were born] I did feel somewhat alienated from my career path and the fact that most of my peers and colleagues had made some different choices about when to have children or how to parent. But when I look back, I wish I hadn’t spent so much time worrying about that. I wish I had understood that being a mother would become an important part of who I was as a Rabbi.

I grew up with the blessing of feeling like I could do anything. I could do it all at one time. That was an incredible gift but it was also a challenge because there wasn’t a clear structure and I wasn’t sure how to make all of those paths feel good and with their proper limits and boundaries. As a younger person, it’s so hard to have the foresight to know what it’s going to feel like down the road. I wish that I’d had somebody say to me at the time, “You’ll live a long life. This goes by so quickly. There’s time for each thing to unfold in its proper proportion.”

The mikvah is a Jewish ritual bath. A mikvah of today, in most ways, resembles a mikvah of 3000 years ago. It’s a very simple structure and the idea is that the water in a mikvah is living water. It’s water that comes from a natural source and in many ways represents the womb. It reminds us that rebirth is possible. So just as we came into the world through water, we have these other moments in life where we find ourselves in need of some sort of new beginning. I learned about the mikvah when I was preparing to get married. I began to go on a monthly basis from the time that I got married and found that, with each immersion, I dedicated time to reflect on where I found myself in my life. You take off everything when you go in, not just your clothes. It’s about being human. It’s about being yourself in your most unadulterated way. When you’re pregnant, you stop going except in that ninth month when you’re preparing for birth.

My connection to mikvah took on a very different meaning after I’d experienced a couple of miscarriages. I had gotten pregnant and given birth so easily. In many ways, I had begun to construct my own identity as someone for whom these things came easily and then it didn’t. I had a miscarriage at 16 weeks. It was very shocking, but I remember the midwife saying, “This is pretty normal. This happens.”

Going to the mikvah helped me move through this space of uncertainty and alienation from my own body. It took much longer to get pregnant the next time. It was over a year and with lots of help. And then again, the second time, I had a miscarriage at 19 weeks. I can only partly remember the pain of that time. In the same way you can only partly remember the experience of childbirth. It felt so dark and cruel. The yearning felt so incredibly deep. Once again the mikvah, when I was ready, was one of those places where I could just pour it out and begin again. Then I had a third very late second trimester miscarriage. Each time, my milk came in and I had that experience of wanting nothing more than to nurse a baby, but there was no baby to feed. There’s a line in the Talmud that says, “More than a calf wants to suck, the cow wants to give milk.” I read that in Rabbinical school before becoming a parent but it wasn’t until these experiences that I understood that so deeply. I would have nursed anybody’s baby. There was nothing I wanted more and yet there was no new baby to feed or to hold.

With the help again of the waters, of an amazing partner in life and good friends, a tradition and a community, I marched onward thinking that that part of the journey — bringing new life into the world — was closed. But somehow I got pregnant again and this baby came out.

How would I comfort someone going through something similar? I think just to know that the experience of mothering, of kindness, of compassion can come at so many different times and in so many different ways. [I would encourage them] to trust that in the here and now we’ll find our way to the next moment. For so long, I always would project forward. I am a planner. I’m a Type A. I feel like my life has taught me over and over and over and over again that we just don’t know the end of the story. It has taught me to embrace the kind of curiosity — hopefully a kind of benevolent curiosity — that comes with being in each moment. In all of its sadness and all of its longing and all of its outrage. Whatever life brings.

My default nature would have been to be very private [about my miscarriages]. A part of me felt ashamed and confused and outraged. I felt all kinds of feelings that were unpleasant and that I didn’t want to put on display, but I had no choice. I was very pregnant every time and I’m a public person and I was forced to share it… which I even knew at the time was somehow very important to my own growth. I had a father who never went out to get the newspaper in the morning until he was clean shaven and dressed properly. The self that we put out to the world around us was very important in my home. Not to be false, but just to always put our best self out there. The idea of being a total wreck in front of people was pretty much one of the scariest things. What I found is that it created an opening for other people to share their own pain. Sometimes inappropriately, but most often with a real sense of loving kindness and wholeheartedness that truly buoyed me in this moment when I could have felt so alienated from the good nature of all life and all people and all things. I felt like I was in everybody else’s boat and that was a relief and it was helpful. I think because people watched me go through that, people are willing to be more vulnerable with me and that’s a gift. Not pleasant, but a gift.

How has motherhood changed me? I feel very human. I feel grateful that I have this opportunity to nurture life, to learn on my own path and help my children find their own strengths and address their many growing edges. I’ve also gotten to visit some of the deeper, sadder, angry, confused parts of life that most all of us face in some form or fashion if we live long enough. It’s been the greatest source of growth and strength and beauty in my life. Both the experience of giving birth and bringing children into the world and knowing what it is to lose that chance.

As a Rabbi and as a Jew, I believe that every person has indivisible worth and infinite importance and yet each of us is just stardust, a speck, and a drop in the bucket so to speak. The larger trajectory of life, of human existence, is so big and vast. It can feel so small, but it’s big and small all at the same. [I hope through telling my story] to encourage a willingness to tolerate all the in-between spaces, all the question marks and the nuance and the gray. To not be so afraid of that anymore, but even at moments of greater equanimity, to delight in it and to know that that’s what it is to be alive.

It is filed under Beginnings: Journeys Towards Parenthood, Read Stories and tagged with faith, miscarriage, rituals, spirituality, traditions. You can follow any responses to this entry through the RSS 2.0 feed.