IVF is a lot more involved than I ever thought. It’s also a very emotional experience, because you don’t know if it’s going to work or not. You’re just hoping you beat the odds. 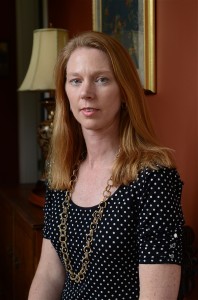 My name is Erin. I’m 43. I have three children—Andrew, Evelyn and Emily and they’re all four years old.

My husband Ethan and I have been married for 12 years. We had talked about having children. I work fulltime. He works fulltime. So we decided to wait a little while… seven years. When we started to try, we had a hard time getting pregnant.

We tried for maybe a year and a half. It was a lot more complicated than we thought. We were really putting in an effort, but eventually went to seek additional medical assistance.

The process of fertility treatment—and I learned along the way—there are different levels. There’s the IUI [intrauterine insemination]—where you don’t have to do all the shots that you do with IVF [in vitro fertilization]. We weighed our odds and talked to the doctors. I was 38 at the time and there were more risks.  We made the decision to do IVF. It’s a lot more involved than I ever thought. It’s also a very emotional experience, because you don’t know if it’s going to work or not. You’re just hoping you beat the odds.

It became very much of a routine for me. Every day you have to do a shot. I actually couldn’t do it. So Ethan would give me the shot every night. Then, once a week, go see the doctor, or go in and just get blood work. They’re constantly monitoring your hormone levels.

We kept it between us. It’s not like you go out there and say, “hi friends. This is what we’re doing.” As the medication got more intense, the needles got bigger. The whole process is very clinical. The treatment was a good six months. You’re working so hard to make it happen. You’re following the rules. We were very lucky. I didn’t have to have multiple treatments as many women do. I got the call from the doctor telling me I was pregnant. He said the levels were very high, which can indicate multiples. Then I had to tell my husband. It was exciting and emotional.

When they’re doing the ultrasounds, you sort of become trained by the doctors on what to look for. At our next visit, the doctor started counting. He got to three and said, “you have three.” I started to cry. Ironically, several weeks before, the doctor said, “I just had a patient that had triplets.” And I said, “I can’t handle triplets. I think I can only handle twins, not triplets.” We had laughed.

Before they were born, I imagined that all the kids would sleep in their own cribs and that everything would stay perfect, neat and tidy. We knew we would need some help because we don’t have family here. I knew I was going to take some time off. I had four months of leave. I thought it was all going to be very organized. Pretty quickly I realized things were not going to be organized and we would need a lot of help. We went into survival mode. The first year, that’s what we were in, survival mode to make sure everybody was healthy.

Giving birth was the most memorable and emotional experience I will ever have. There were so many people in the room. My main doctor, nine nurses. It was surreal. Andrew was first. He was baby A. Then there was Evelyn, baby B, and then baby C was Emily. One by one, they were taken off immediately to the NIC unit. I didn’t see them until that evening when Ethan wheeled me in.

I stayed in the hospital for three or four days. I couldn’t bring the babies in my room. They had to stay in the NICU with monitors—needles and cords to monitor their heart and breathing. When I was released, I was so tired. I needed to get myself back into better health. We went home and would go to the hospital every day to be with them. We had a few moments with Evelyn. She braided, which means her heart rate went very, very low. And we didn’t know if she was going to make it.

The goal of the nurses and doctors was to get the kids in one crib. We didn’t know this but, with multiples, if you can get them together, they typically thrive. That’s ultimately what happened. And then they came home. It was the most insane time of our lives.

We had the nurses help get them in the car. We live five minutes from the hospital, but the drive home felt like hours. It was so scary. We had a doula and nanny come over. We had dinner. They asked, “are you going to be ok?” We said, “We think so,” then they left. In about two hours, I started to cry because it was crazy. Ethan and I slept maybe two hours that night. The next morning, I called the doula and said, “we need help. I don’t know what kind of help, but we need help.” She started helping us out from 7 pm until 3 am three nights a week. It was an adjustment but we learned that we had to keep adjusting to the needs at each stage.

The first month was really intense because the kids had to be fed every three hours and it took an hour and a half to feed all three. I only breastfed for three weeks. It just wasn’t working out. I was pumping after that along with giving formula. After the feedings, you were then prepping for the next feeding. They had to be watched 24/7. Emily especially. She had this situation where she would just make this noise and she could not breathe and if you did not hear her… We had to suction her out. I don’t think she would even make it to the ambulance. It was all hands on deck.

We had all the kids downstairs… it was literally feeding, changing diapers… and doing that all day and all night. A nanny helped me during the day. Ethan was working fulltime. He would get home from work and go to bed right away. Then he would get up at midnight and I would get some sleep. We would just take shifts. We realized at three months, that we needed a night nurse. Twice a week, we had someone come in at 10 pm and she would leave at 6 am. As soon as she arrived, Ethan and I would go upstairs and go straight to sleep. I had a very hard time with having all these people in my house. I am a quiet person and want some privacy. I had to get over that. I needed to let people help. Friends from the neighborhood came over, bringing dinner or clothes. That was so helpful. The outreach. It got better after four or five months.

Our nanny and Angela, the night nurse… I can’t be thankful enough. The expenses. Even just the formula… the first months, we were spending $900/month on formula alone, and lots of diapers.

Me changed? I didn’t know what sleep deprivation looked like. I remember one morning I woke up and thought I had sand in my eyes. My priorities have completely shifted. Work is important but it’s not my top priority. My kids and my husband are. And then work. That was very eye-opening for me. I don’t look at my time the same way. I look at what needs to get done and then what time do I have? It has influenced our ideas about religion, too. I grew up in not a very religious household. But Ethan and I have realized that religion has to be a part of our life.

My relationship? I look at Ethan in a different way because he is so wonderful with the kids. Sorry (crying) I didn’t think I would get choked up. Excuse me. (continues crying). I’ve realized how wonderful he is, what a wonderful father. We couldn’t do it without each other. I’m obviously emotional over it. I feel bad because during the course of the day we’re bickering with each other. Or he’s more forgiving when I am bickering. But we need to stay together. We have to stay together. He’s so incredible and giving. I see him differently now and I don’t think I would see him in this way if we didn’t have kids.

Advice? Take care of your health. The car seats, the strollers… that will come. When I was pregnant, I had to make sure the kids were healthy so I had to make sure I was healthy. I said, I don’t care what gender I have, but the kids need to be healthy… because there was such a high risk of them having something. I know that’s simple, but if you’re healthy and happy, if you have those, then everything else can come together.

It is filed under Beginnings: Journeys Towards Parenthood, Read Stories and tagged with infertility, IVF, multiples. triplets, older. You can follow any responses to this entry through the RSS 2.0 feed.