I was in high school when I became pregnant. I was a straight-A student, in AP classes, in track and band, but that all changed when she came. 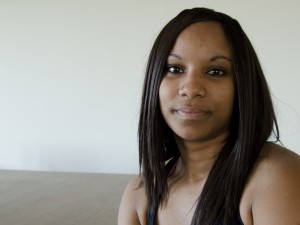 I am 21 years old. I have a three-year-old daughter named Faith.

(Before Faith) I guess I was your typical teenager. I was in high school when I became pregnant with my daughter. It was my junior year. I was involved in track and band. I was a straight-A student looking forward to applying to colleges, but that all changed when she came.

I hadn’t been late that long before.  One day before track practice, my best friend took me to the CVS and we bought a pregnancy test. It came out positive. Carrying that secret while going to track practice was really difficult. I didn’t hold up well. My track coach saw me bawling and asked what was wrong. I told him that I was pregnant. And there was this look of shock and disbelief. He told me things were going to be ok.

For the longest time, I kept thinking this was all a dream. This was not supposed to happen to me. I had my life together. I was doing things. I was going places. Pregnancy wasn’t part of the plan.

My family is very religious. Abstinence until marriage was definitely what they preached. I waited three months before I told my mom. I was scared of how they would react. I cried myself to sleep pretty much every night. I had gotten to the point that I couldn’t take it any more.

In the midst of all the tears, I prayed. I said “God, I’ve tried to do this by myself. My back is against the wall. I’m just going to leave this in your hands.” The next morning, my mom and I were sitting at the breakfast table. And she was sharing with me about her experiences as a child. She said there were points in her life when she didn’t know what to do and she just turned it over to God. I told her I was pregnant. At first it didn’t sink it. She got up from the table, went upstairs and took her phone and ended up calling one of her friends. She was hysterical. She told her friend she was dying. Her friend comforted her and said we would be able to get through this.

I really didn’t start showing until I was seven months pregnant. But going back to school in the fall with a belly bump… that was really hard. Everyone had expectations of me. They knew the type of person I was. Getting pregnant at an early age wasn’t something I was supposed to do. I felt like I had let everyone down.

Labor? The most excruciating pain I have ever felt. The best part was when she was finally there. When my dad held her for the first time, all the disappointments and all the hurt – it had all subsided when Faith was there. I ended up delivering with Faith’s dad’s mother, my mother, and Tyler.

I like stress. I like to punish myself. I ended up having her December 22. We had winter break December 19. We were given two to six weeks to recover after having a baby. But I was in AP (advanced placement) classes. As soon as school started I was back in class. I was tired, but I was ready to graduate. I wasn’t going to let this hold me back. My mom promised me that she would help me raise my daughter and help me get through school. So we just pushed through.

I was planning on breastfeeding, but Faith didn’t latch on. She was four months before she latched on. So during that time was a whole bunch of pumping, in the middle of the night. I was dead tired but engorged so I had to pump. Being in school, I had to wake up relatively early to catch the bus. Being away from her during the day was heard. I was still in track. By the time I got home, I was absolutely exhausted. I was always tired.

I was fortunate to be a part of an organization called the Adolescent Parenting Program. They’re an amazing group of women who host events for teen parents.

Knowing that there were other girls at my school going through the same thing, it was comforting.

My goals are still there. The route I was going to take has just been altered slightly. They’re still attainable and I plan on achieving everything that I set my mind to. It might take a little time. It might not be the way I imagined. I am currently in my senior year after being here at UNC for three years. I’ll be graduating a year early.

Prom during my senior year wasn’t in the picture for me. Our band went to the Macy’s Day and I couldn’t do that. There were a lot of things my friends wanted me to do, that I wanted to do, too, but after awhile they realized, “ok, her situation is different. She can’t do that.”

When I first told him, Faith’s dad was shocked. He was in the band. He wasn’t pregnant. He was able to do everything that I wasn’t able to do so that was really hard for me to deal with. It was harder for my mom because she had so many goals, and things she wanted to see me do, but I was being held back while he was able to pursue whatever he wanted to. He and I fell apart. I realized I really am the one whose going to deal with this and he’s going to continue living his life and doing what he wants.

Prior to the pregnancy, my parents and I weren’t that close. Finding out that I was pregnant put a wedge between us. There were a lot of disagreements, hurtful things said. But after faith came, things have changed. My mother and I are a lot closer.

How have I changed? I have changed completely. My mindset is a lot different. I’ve grown up. I was a kid that had a kid that had to grow up and that’s what I did. Being here on campus, around kids my age, the mentality, the thought process, everything we do is so vastly different. When I factor in what my weekend looks like. I factor in home. I have to see my daughter. Everyone else is going out. When I think about shopping, I don’t shop for myself. I shop for my little girl.

While I don’t regret my daughter–I love her to death–I feel like I missed out on a chunk of my childhood that was supposed to be there.

She is my motivation and my driving factor to finishing college as quickly as I am. When I started college, she was 6 months old, so leaving her at home was more difficult for me than her. I understood the gravity of the situation. Now that she is three years old, it’s equally hard. She cries every time I leave. It affects me a lot. And I know it affects her. I call her every single day. But the most exciting times for her is Fridays. When I call her, she says, “mommy, I coming to pick you up on Friday.”

Advice? I think my one piece of advice would be the thing that kept me going the entire time… I think its important for teen mothers to realize that it’s still possible. The goal is still there. The way you go about getting that goal might be a little different and take a little longer, but it’s still possible.

It is filed under Beginnings: Journeys Towards Parenthood, Read Stories and tagged with teen_pregnancy, unplanned. You can follow any responses to this entry through the RSS 2.0 feed.