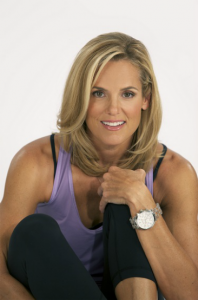 Before kids, I guess I had a lot of free time. Life was more about me. I was always swimming. I started swimming when I was seven and training seriously by the age of 11. I went to my first Olympics in 1984. Since then, I have been putting in six hours of swimming every day for many years. Now, while I still swim, my life is really about my daughter.

How did I decide to become a mother? I have five siblings. There are six of us. I adored my nieces and nephews and I began to really want a child of my own. It took me a long time to have Tessa. I had her later because I felt like I could give her more of my time at that point. I could be there for her. If I had had her earlier, it would have been much tougher. I was 39 when I had her.

Being a mom really puts things into a perspective. In 2008, at the Beijing Olympics, all of these kids were getting ready to swim. They were thinking that this moment would be the most important thing that would ever happen to them. But, in my world, as the only mother in swimming in the Olympics, I knew that having my daughter was the most important thing. She really helped me put everything into perspective.

How was it to go back and compete so soon after having her? I thought my Olympics days were over, but some older master swimmers coaxed me into trying again. I didn’t know how I was going to balance being a mom and doing what I love to do, but I really looked to other working parents as my motivation and inspiration.

The most challenging experience was leaving for the Beijing Olympics [in 2008] when Tessa was 15 months. There were no rules in place about bringing children. No other woman on the swim team had ever had a child. If I really wanted to achieve this dream, I had to put everything into it. I had to be with the team the entire time. I didn’t get to see her for about five weeks. The minute I finished my race, I saw one attraction, the Great Wall, and then went home to her. I’ll never forget. It was about 11 at night when I got in and she was fast asleep. When she woke in the morning, she called the nanny’s name. I whispered “Psst. Psst” –that’s my thing with her—and she came running over to me. It just felt so good to be home and with her again.

How have I changed? I am more patient. That would be the biggest change. You have to have patience when you have a child.

What wisdom would I have to offer other women struggling with balance? It’s important to understand that everyone feels guilty. When I have to be on the road for a day or two, I always feel guilty. That said, I think that the biggest gifts you can give your child are love and showing them happiness. When you are happy, you can more easily do what’s best for your child. You can balance being a great parent and doing what you love.

It is filed under Beginnings: Journeys Towards Parenthood and tagged with work. You can follow any responses to this entry through the RSS 2.0 feed.