Asking for help is hard, especially when it’s for your child. You need a community of people to help. It was really humbling. 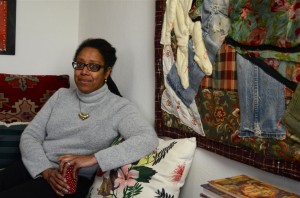 In truth, I don’t know what I thought having a child was going to be like. I had an idea that somehow a child is an extension of your relationship, of you, or your legacy. Pretty much immediately, really immediately, I knew that nothing that I imagined or could have imagined was the case.

I was almost 27. We thought ‘first child, first pregnancy, oh, he’ll be two weeks late.’ But actually he was two weeks early. I don’t do anything early. We had midwives, but we delivered in the hospital. We labored at home, listening to the same music over and over. When we got to the hospital, he was born very, very quickly. On his delivery, he was lavender-colored and we’d seen a lot of birth films and the vernix and all that stuff. I was like, ‘wow, look at that color.’ We are so beside ourselves that our baby was out in the world and it was so quiet and he wasn’t making any sound. And we didn’t wrap our heads around what that might mean.

The midwife cut the cord and turned around with him. She and the delivery nurse were checking him out. I thought they were doing his APGAR test, but I think they were stimulating him to get him to breathe. Then they handed him to me to nurse and he was still completely quiet, but his eyes were open and he stared right into my eyes and held my gaze and I thought—really this is what crossed my mind—oh no, we are in so much trouble. This is so much more than we are prepared for.

From the beginning, he was his own person. He came on his own time and in his own way. Just a few years ago, I finally put this all together. His umbilical cord was wrapped around his neck and he was losing oxygen and he wanted to come out and he fought to be born. He fought to survive. And that’s the way he’s been pretty much his whole life. On one hand, he is a scrappy intense fighter and on the other hand, he can be so calm and so gentle.

Around the age of two and half, on the bus coming home, he articulated some thoughts about race. His father is white and I am black and he has been engaged with both families since he was a baby. Different kinds of people. Being in daycare and being around some caregivers who may not have been so sensitive, he got that there were differences and that bothered him. One day, on the bus, when an older lady was getting on the bus, I said to him, ‘get in my lap so we can let this lady have a seat.’ And he said, ‘I don’t like brown ladies.’ And I said, ‘But Hunter, I’m a brown lady.’ He said, ‘no, you’re my mom.’

This was the beginning of when he became more physically combative with other children. We found this magnet school close to our house. Very groovy. Bank street model. He did great. He made friends, but around first grade, when children were starting to read, his behavior started getting progressively worse. Until by the third grade, he had this perfect storm of an inexperienced teacher, a class mostly full of children who could read, and himself, very intelligent and observant enough to know how he stacked up to his peers. On the one hand, there were things he knew he could do on which he was on par or even ahead of people in some ways, but then everyone else had this thing—reading—which he couldn’t get—which was essential, seemingly the most important thing of all. That year, he went berserk. He was fighting every single day. All some other child had to do was be within three feet of his space and he would lose it.

I took Hunter to two psychologists who worked with children with different learning styles. The social worker, the school and the psychologist were trying very hard to have us not label and pigeon-hole him, but at the same time we wanted our son to learn. He wasn’t a bad kid. He was a frustrated kid. We took him out of school and we homeschooled. We were reading more, taking advantage of different kinds of therapies and tutors and friends who were writers and artists, and just trying different ways of getting him interested in reading. We finally did teach him to read. Now he’s 26. He reads the Times. He reads a billion different blogs. I never thought that would happen. Never. We changed. He grew. He’s become who he always was.

I think I had a perception that if you made yourself available to your child in particular ways, if they were part of your lives, you’d have perfect, easy, brilliant children. And that if you read to your child, your child would be a good reader. I also felt that your child was an extension of you in some way. But my children are not that. My children are separate individuals with their own issues and paths and their own strengths. Before I had children, I thought you made children who they are, and in my experience with our son, I unlearned that.

If your son does well in school, you’re proud. It’s because you get to take credit for that. And when your child is not successful, the opposite is true. You have to take responsibility for that, too. I’d come to an understanding that we were responsible for his successes or his failures. I had to let go of some shame. It was embarrassing to have the kid that was always in trouble and that the principal was always calling you about. But I stopped being embarrassed and started asking more questions about why it was happening and started understanding some things about how people’s minds worked and not having judgment about those things. I learned to judge less. I am incredibly grateful for that. I think walking with him helped me to be a more compassionate person. To have a softer heart.

My husband and I, having children, it has bound us inextricably. We are inelled. It was like both of our children have taken us through a refining fire and it has made us much closer than I think we could have imagined. I think again we are really fortune because I am sure for that there are people for whom the opposite is true. But for us, it’s really bound us.

My daughter.  Years later we have a second child. He comes out two weeks early. She comes out two weeks late. He comes out silent. She comes out screaming. But she looked just like him. How strange. How could this be? And yet, they are bizarrely different and bizarrely alike. Her early years, a dream. If we had had her first, we would have been such jerks, because we wouldn’t have learned that it wasn’t our stuff to take credit for. We would have thought ‘She’s brilliant, perfect, well-mannered and beautiful. Aren’t we great parents?’ But fortunately, it didn’t happen that way. So here we are with child number two. We’re humble, yet incredibly relieved. We get to her sophomore year in high school. AP this, honors that. She travels in the nerdy, smart groovy, socially conscious circle of kids except she doesn’t feel like she has a best friend. She’s really sad, because she doesn’t have a best friend and she doesn’t know how to make friends. I tell her I don’t know how to help you with that. So I made an appointment for her with a therapist and the week before the appointment, she has a friend over and they have a lot in common and this girl seemed the perfect girl to be her best friend. And I’m really feeling happy. After we drop Hannah off, I say, “so Iona Pearl, how was that? Did you and Hannah have a nice time? I think I know the answer.” And she looks at me and says, “I don’t know.” And she bursts into tears and talks about not knowing how she feels.

I thought, Oh no, because I’ve struggled with depression and I suddenly recognized it. I thought, how could I not have seen it? The therapist met with her and suggested she see a psychiatrist and be evaluated. And she did get a diagnosis of depression.

We started working with medication. It was a solid year pretty much of one day feeling like it might be working and the next day disaster. She had talked to the therapist about hurting herself. What do you do when you learn something like that about your child? We had to go to the school and talk to her teachers and say this is what’s going on with our child and ask for help. Which is really heard for us. We’re both older children and like to do things ourselves. Asking for help is hard, especially when it’s for your child. You can’t help your child. You need a community of people to help your child. It was really humbling and painful in a different way than what happened with Hunter because we were so frightened.

Could other life situations bring you to this point? When you choose to move forward with having a child, and you are fortunate enough to be able to carry that child in your body, I think maybe there’s some kind of resonance that you really feel in the core of your body when something is going wrong for them. When they’re in pain, it’s like there have been handful of times when I can say that my heart, my heart has been broken and really have that feeling, understanding what that expression means, because I can really feel that my heart is broken. I think that can happen with a friend, that they can touch you that deeply, and with someone you love very much, but certainly with me, my children, yeah, I think that it’s physical. It’s so beyond an intellectual understanding. It’s in your cells or something.

It is filed under Endings: The Children Leave Home, Read Stories and tagged with biracial, depression, disabilities. You can follow any responses to this entry through the RSS 2.0 feed.