If I had known everything that was going to happen, my life may have been very different, but the best thing that happened was that I was so busy working and being a mom and kind of just living in life’s moments that there wasn’t time to panic. 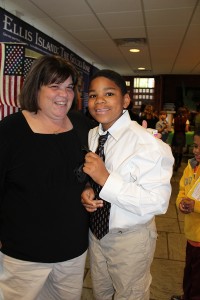 I contacted an agency in Buffalo, New York. The director asked me what types of children I was open to adopting. “Would you adopt a child with special needs? An Asian child? An African-American child? A bi-racial child?” I was concerned that my kids would already be burdened in the sense that I was a single parent. I didn’t want to add too many other burdens. The director told me that she had adopted bi-racial children and was raising them Jewish. She also told me that the only option available in that region was their African-American or bi-racial program. I signed on and eight months later I got a phone call about Matthew.

At the time, I was director of a summer camp and had just finished the first week. I went to my parent’s house and collapsed. Becoming a mother was the one thing I’d waited forever for and then felt nowhere near ready for — all at the same time. That Friday night, we shopped like crazy people. On Saturday, we made the drive down and back to Buffalo to complete the paperwork and then Sunday, we drove to New Jersey to meet Matthew. I’ll never forget walking in and looking at him and just being in total awe. I spent about an hour with him in the agency and then my parents drove us all to my grandmother’s house. I sat in the backseat of the car just staring at him. I fell in love.

[When I began the adoption process,] I didn’t know enough about special needs to be scared by them. Around the age of three, it became very apparent that Matthew had some special needs. He wasn’t learning at the same pace as everybody else. It took a long time to get his diagnosis. He was about eight when it was determined he had fetal alcohol syndrome. If I had known everything that was going to happen, my life may have been very different, but the best thing that happened was that I was so busy working and being a mom and kind of just living in life’s moments that there wasn’t time to panic. Matthew was at his best when there was a baby around. That kind of pushed me along to adopt David and then also later to adopt Jacob. I always thought I’d have four kids, but three is pretty good. They all have some version of developmental disorders. So life is busy.

Not too long ago, I started a blog. As a single mom, I realized that I needed to keep track of what was going on in our lives. With three kids with very different needs, it’s sometimes hard to remember the good moments when you’re stuck in the midst of really rough ones. I found that my best way of dealing with the ups and downs of life was to write them down. Once I’ve got it down, I can then move forward. It also helps me remember moments. For example, I might remember the last time we were in a dark space, but then see that it got better a week later.

My long term hope is that my blog will help people caring for kids with special needs know that they’re going to get through it. It’s going to be challenging, but it’s going to end up being okay. I hope to turn it into a book one day. There aren’t a lot of books that support parents caring for children with fetal alcohol syndrome, that tell the nitty gritty, and share both the dark and the happy times. As for support during the dark times, I’ve also got two amazing friends and a great family and community.

People ask me all the time, “How do you do it? How do you do it?” There’s no choice, but to do it. Last night was really rough. Matthew had some really intense outbursts and David was having seizures. That’s what our life can look like. This morning was different. I’m pretty good in a crisis. And I wouldn’t have it any other way. I couldn’t imagine not having these kids in my life.

I run a Jewish pre-school and faith is a big part of my life. When David was little, he was having seizures. Sometimes, when we’d go to a public place, he would rip things up and throw things at people. One night when we were at Temple, David grabbed a book. I thought for sure he was going to throw it. He looked at me and he held the book and then he said, “We’re praying.” It was just really special.

Fetal alcohol syndrome is the biggest curse that I can imagine because of the way that it affects Matthew. He is the most gregarious, enthusiastic person I’ve ever met in my life. You bump into him in a grocery store and he’s got a hug and is excited to see you and such zest for life. But he’s missing a lot of what you’re saying. He’s got mild mental retardation. He can’t really create friendships. And this was preventable. Entirely preventable. It’s horrible to watch him struggle.

Advice? When you adopt a kid at risk for special needs, understand that they won’t be identified until about kindergarten. Make sure you’re really ready to take this on. Also, have a strong community. We could not do everything we’re doing without a strong community. Jump in with two feet. You won’t know how much you can handle until you’re handling it. Find an outlet and good support. I wouldn’t do it any differently. I really do think I’m the luckiest person in the world to have these three boys.

How have I been changed by motherhood? I never thought I’d be as much of an advocate as I am. I never thought I would be able to really stand up for what I believe in. Before kids, I would have told you I didn’t have that in me. But I’ve been on the news three times now advocating for my kids and all kids.

I think, also, it’s important to remember it could always be a lot worse. I run a pre-school program. We have children with very significant physical needs and very significant disabilities. No matter how it’s looking around my house, I have to remember that my kids can speak to me and they can walk and they can talk. In this world, there’s always somebody who’s got it worse. During difficult days, it’s important to keep that in mind and remember that tomorrow will be a different day. Give your best shot every day. No matter what kinds of children you’re parenting. There are so many children in this world that need good, loving homes. Everyone deserves to be part of a family.

It is filed under Beginnings: Journeys Towards Parenthood and tagged with adoption, fetal alcohol syndrome, single motherhood, special needs. You can follow any responses to this entry through the RSS 2.0 feed.